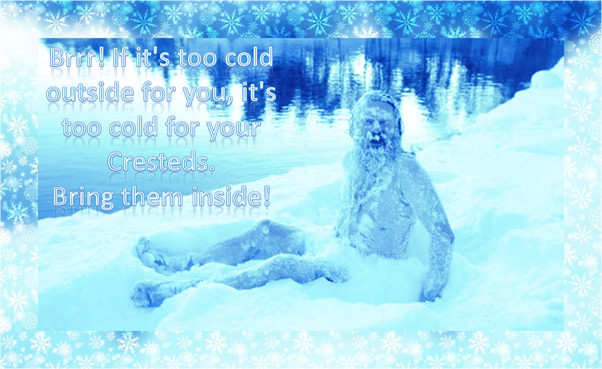 Cresteds like to keep themselves clean and many owners remark upon their catlike nature with their tidy habits love of heights and frequent sunbathing. Adaptable they are suitable for many kinds of dwellings, including apartments and city living. They are ideal pets for virtually all types of individuals provided they have fairly constant contact with humans. They are not a good breed of dog if you have a busy household where people are gone for long periods of time.

The Chinese Crested Dog is one breed of dog that does bond very strongly to its owners. They will often form a very close bond with one or two people in the family and often this bond is for the life of the dog. Even when these people leave the house the dog will continue to wait or look for them, getting despondent or depressed if they do not return. Often called “velcro” dogs, they will physically attach themselves to their favorite person, and will use their paws to hug that person around the neck Whether you’re cooking, cleaning, reading or taking a bath, your Crested will be right there adoring you. The Chinese Crested Dog is very difficult to re-home for this reason and most breeders are highly selective about choosing which families will best suit the breed.

They are wonderful family friendly dogs who love to be with the people in their lives; not aggressive toward children or other animals. They do well with children; very willing to be doted on, dressed up or pushed in a pram. Lively and playful they love to be cuddled. Although due to their size you should consider the age of the children and how they interact with dogs before bringing this small creature into your heart and home. As with every breed, you should always teach children how to approach and touch dogs, and always supervise any interactions between dogs and young children to prevent any biting or ear or tail pulling on the part of either party.  Cresteds can be hurt easily with rough handling and shouldn't be left unsupervised with children, or even alone out in the yard when young. Caution should be used when letting him off-leash on walks. Tiny as he is, large dogs could view him as prey.

Remember: A twelve week old crested puppy is much the same size as a young rabbit to a Hungry Hawk, Angry Seagull or Rambunctious Lurcher!

﻿Dog books often describe the Chinese Crested as highly friendly, but that's actually the exception rather than the rule. Yes, he's highly likely to smile at you when he's been naughty, but that's not quite the same thing. He's likely to be extremely sensitive and reactive, and he has a high social drive, (Expect yours to sleep under the covers with you.) He can be wonderful with familiar people, but he's likely to be spooked by strangers unless he's been well socialized.﻿

Remember: Mental stimulation is an important tool in preventing boredom induced naughtiness. There are many toys and puzzles designed for dogs on the market, and your crested can enjoy most of them.

﻿He'll alert alarm bark to protect his home like miniature guard dogs (not that the burglar is going to be terrified). He isn't particularly yappy, in fact when you're around they're comparatively quiet dogs but he is adamant about his guard duty and will do his job as he sees fit. Because they're so social Cresteds can suffer from separation anxiety, many are known to be wonderful "singers" serenading your return when they hear you in the drive. However this can be prevented or overcome with the appropriate training ﻿

﻿Chinese Cresteds are adept at jumping, digging, and climbing due to their unique “Hare Paws” which are basically the doggy equivalent to quick and nimble fingers. Don't make the common mistake of underestimating their athletic abilities just because they're small. They are Houdini Hounds who given enough time to strategize can escape from virtually any enclosure. A six-foot fence around the yard is a good idea; if they can get a grip on a fence, they're over it. They have absolutely no fear of climbing or jumping, and they can easily clear four feet from a standing position﻿

﻿Once they're out, they move fast and can be averse to recapture (chasing is one of their favorite games). They are more stubborn than you are!﻿

The Chinese Crested Dog is an ideal dog for those that want a pet that can do unique and interesting tricks. The Chinese Crested Dog is known to commonly sit up, walk on his or her hind legs, jump through or over objects and climb ladders and other objects with just a bit of coaxing. Since they are very "in tune" with their owners they will do whatever it takes to make the owner happy

The Chinese Crested Dog loves to dig when outside so you may wish to train the dog to use a particular digging area, rather than the landscaped areas. Consider hiding a few treats of favourite toys in the area then praising the dog for digging them up. They will quickly learn where a good place to dig is and where is not

Being a very intelligent breed Chinese Cresteds are generally easy to train doing well in obedience and agility type sports but they have a stubborn streak, which means you need patience. Consistency is a must with Positive Reinforcement the only route, and correction needs to be handled sensitively, because the breed can be naturally timid

Enrolling him in a puppy kindergarten class is a great start. If possible find a place that offers separate small-dog puppy classes, so your Crested can socialize with similarly sized dogs. He could be injured while playing with a larger puppy. Inviting visitors over regularly, and taking him to busy parks, stores that allow dogs, and on leisurely strolls to meet neighbours will also help him polish his social skills.

Remember: Do not baby this breed or you might cause it to be timid

﻿﻿Do not let this wonderful breed fall into "Small Dog Syndrome" where they lack a human pack leader. It is easy to baby a small dog, however, doing this can cause many unwanted behaviors. If your dog growls, guards objects, snaps or bites, the dog has been allowed to take over and be pack leader to the humans. These behaviors can be corrected as soon as the humans start displaying the proper leadership
Never stick your Chinese Crested in a crate all day long, however. It's not a jail, and he shouldn't spend more than a few hours at a time in it except when he's sleeping at night. He's a people dog, and he isn't meant to spend his life locked up in a crate or kennel.

Crate training is also helpful for house-training especially in the very early stages, which can be one difficult area of training for all toy breeds.

Remember: puppy bladders are as small as they are and it may be some months before they can hold it all night or even for longer than a three hour stretch.

﻿They are naturally very clean dogs and even as puppies will do their best to avoid messing in the house or in areas where they are kept. But don’t put a young dog in an unfair situation where their likely to have an “accident”. Feed early in the day providing access to “potty” areas first thing in the morning, about twenty minutes after meals and regularly throughout the day. Consistency and routine is key here (which means the same rules/timings on the weekend!) but it will all click into place eventually﻿

Remember: All puppies are like young kids; too much squeezing or excitement to close to a feed can result in messes from either direction :(


Finally, crate training puppies is much easier if you know how to choose a crate. The crate should be just big enough for your puppy to lie down and sit up in. However, you don’t want to be constantly buying new crates as your puppy grows. So, it’s best to get a larger crate with dividers that you can put in and then remove as your puppy grows. If you can’t find crate dividers then a simple alternative is to block of an area of the crate with a large shoe box until your puppy gets a bit bigger. That way, you can make the most of the crate training and reduce the chance of accidents or injuries in the crate.

Please see this handy Info-graphic with more crate training hits and tips
﻿Dogs that do not get to go on regular walks are more likely to display a wide array of behavior problems. Too much carrying and coddling can actually cause these dogs distress and increase the likelihood they will have separation anxiety and problem behavior when left alone.﻿

Remember: They are dogs and need to be given time to just be dogs!

Also as with all small dogs Chinese Cresteds are prone to weight gain if inactive, so finding a way to keep your Chinese Crested Dog active is important. They do enjoy outdoor walks and are good on the leash once properly socialized and acclimatized to being in new environments and places. Since the Hairless has no protection for its skin make sure you put a coat on when going for walks that involve going through brushes or even heavy grasses as the skin can easily be cut or injured.

The Chinese Crested Dog does enjoy playing and can be taught to fetch, retrieve or play games like hide and seek either with favorite toys or the family. They do get along well with other dogs and will play and interact well with dogs, cats and other pets. Again it is more important to monitor any injuries that may occur on the hairless variety as they don't have the natural protection of a protective coat. The Chinese Crested Dog will quickly learn to play and run in the house, often to the delight of the family.

In Summary:
Alert and happy, the Crested adores and dotes on his people. Expect kisses and lots of snuggle time in your lap from this happy, loving little guy. Understand that he doesn't accept strangers easily but once he comes to love you, you become his world.