Although hairless dogs have been found in many places in the world, it is unlikely that the origins of the modern Chinese crested are in China.  In fact unlike what the name would indicate, the Chinese Crested Dog is believed to have originated from the African hairless dog breed. In all hairless breeds, except the American Hairless Terrier, coated brothers and sisters appear and it is impossible to breed just hairless as, even after five generations of hairless to hairless mating’s, it remains possible for a complete litter of coated puppies to be born to hairless parents

It was discovered by Chinese sailors and merchants traveling to African ports on their routes who immediately saw the advantages of a small hairless dog which is largely unaffected by fleas. They brought the dogs on-board their ships as ratters to manage the vermin population, which was infested with parasites and carried disease.

The Crested is believed to have accompanied Chinese sailors on the high seas as early as 1530, hunting vermin during and between times of plague. The breed now known informally as “Chinese Hairless" or "Chinese Crested” was then redistributed in trading ventures at different ports throughout the world including Central America and South America; where the Aztecs who considered them sacred, actually used these dogs not only as companions and bed warmers in the cold months, but also as a source of food at special events in the Aztec calendar. The chronicles of Christopher Columbus and the Conquistadors mentioned hairless dogs. Records from 13th Century China describe a Chinese Crested Dog called “Little Horse” having jade beads plaited into his mane with gold and silver threads, he also had a fur lined coat for cold weather
This gradually built through the 1800's as the breed became better known and accepted known in Europe and North America; as is shown in one of the works of celebrated animal painter Jacques Laurent (1767 - 1849) shows a fine Deer type male eminently suitable for today’s show ring. Though it wasn’t until the middle of the 19th century, that Cresteds began to appear in any great numbers in European paintings and prints 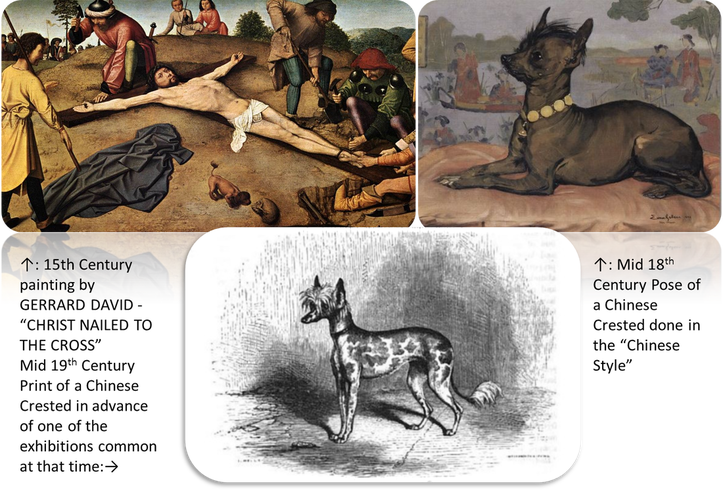 The first Crested to enter the English Kennel Club Stud Book was “Fatima” registered as “Crested North Chinese”. She was born on 23rd November 1901, sired by “Chino” out of “Jamita” (both of unknown pedigree). However they failed to become established in England as there was no registered progeny of these early dogs and consequently they have no influence on the present day Chinese Crested.

Roughly around this time a picture of both the Powderpuff and Hairless appeared in Harpers Weekly, where it crossed the path of a young well-known New York newspaper reporter and journalist of the time, Ms Ida Garrett who became interested in the Chinese Crested. Eventually becoming involved in a lifelong love affair spanning the next 60 or more years.

Ms Garrett bred, exhibited and wrote extensively about these dogs that she loved. In the 1920s, she helped Mrs Debra Woods of Homestead, Florida; obtain Chinese Cresteds and other hairless breeds. The two women became fast friends. For almost 40 years, they jointly promoted the Chinese Crested with great dedication and focus. Mrs Wood is widely credited as the doyenne of the breed and it would appear she gathered or obtained almost all of the hairless dogs then known.

Mrs. Woods kept a log of all of her dogs starting in the 1930s, and by the 1950s when she created her own "Crest Haven" kennel that journal became a registration service for all hairless breeds which further expanded in the 1960’s with the founded the American Hairless Dog Club. Though the Chinese Crested was in the Miscellaneous Class of the American Kennel Club in 1955 when the first breed list was printed in the American Kennel Club Dog Show Rules. The revised list in 1965 dropped the Chinese Crested due to lack of an acceptable registry, no National Specialty Club or reliable standard. At the time there were only 200 Chinese Cresteds registered.

Things were beginning to look bleak despite the best efforts of Ida and Debra; however help was at hand from two ladies of the entertainment industry. It is these famously infamous women that were responsible for rekindling a popular interest in the breed.

Gypsy Rose Lee the famous burlesque dancer had acquired her first Chinese Crested from her sister, June Havoc, in the early 1950’s. June Havoc had obtained the dog “Fu Man Chu” from an animal shelter in Connecticut where it was abandoned when the owner had died while in port. Through the diligent efforts of these four women the promotion of the Chinese Crested breed was now met with great success. In fact it was Miss Lee’s dogs, along with the Crest Haven dogs, that ALL the English and American foundation lines are reportedly built on

Mrs Ruth Harris of Staround first imported Chinese Cresteds to England in 1965, with her first litter whelped in 16th April 1967. However it would appear that she initially had great difficultly establishing the breed; eventually consulting with Gypsy Rose Lee who’s breeding program in the 1950’s was quite successful. In 1969 Mrs Harris imported three dogs for breeding or show purposes from Ms Lee who accompanied the dogs to England herself.

This included Staround Ahn Ahn Lee, grandson of Fu Man Chu a dog to have considerable influence in the breed both in England and abroad. His daughter (Aust Ch) Staround Yinga with (Aust Ch) Staround Zorro were the first Chinese Cresteds imported to Australia in 1973 becoming the continents foundation breeding pair for Mrs Win Jackson of Miniatura Kennels.

Meanwhile in America Ms. Wood continued to maintain the breed studbook records and guarded them with great pride until her death in 1969. Whereupon they were passed to Jo Ann Orlik who maintained them for a further for twelve years; until ultimately they became the property of the American Chinese Crested Club which was founded in 1979. A reliable Standard was developed as well as well as incorporating the dependable Registry based on Ms. Wood’s work.

Through intense work and commitment to the breed by the membership of the American Chinese Crested Club, the Chinese Crested breed was once again able to compete in the Miscellaneous Class at American Kennel Club shows in September of 1985. In England the breed had initially been established on the Kennel Club Import Register. Though by 1982 full recognition had been granted with the first British CC’s awarded to Cresteds at Crufts that year. However Powder Puffs were not allowed to be shown until 1986.

In America from 1979 to February of 1991, the Chinese Crested was also shown as two separate varieties, both needing to adhere to the same Standard with the only difference being the lack of hair on the Hairless and complete hair covering the Powderpuff. While both varieties may appear to be different breeds, upon familiarity it becomes easy to see that they are the clearly the same breed.

On a worldwide scale the Chinese crested was officially recognized in Europe by the Fédération Cynologique Internationale in 1987 and by the Australian National Kennel Council in 1995.

In Summary: The history and evolution of the Chinese Crested is a fascinating one. At the same time an ancient breed with a rich past and a young one relatively recently establish and recognized. Through the herculean efforts of a dedicated few, Chinese Crested have grown from near extinction to gaining steady popularity and worldwide renown over the last hundred years as sprightly little pals and cherished companions. 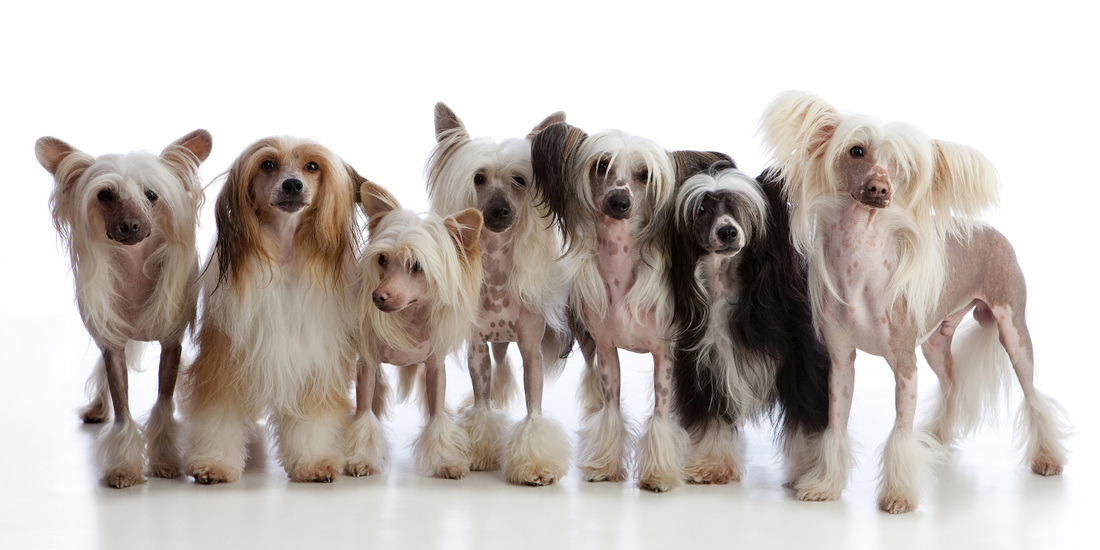