For many years the Hairless was regarded as the only Chinese Crested Dog and the Powder Puff at best ignored. They were seen as lesser aberrations within the breed, something to be weeded out and could not even be shown in either the UK or Australia until quite recently (1986 and 1984 respectively) as our understanding of the genetics involved grew.

However both varieties must be interbred because the Hairless is the result of an incomplete dominant mutation which is lethal when homozygous (carrying only the hairless gene).

A lethal gene (Hr) is dominant over the recessive (hr).

Hairless Crested are Heterozygous this means that they carry the dominant gene for hairlessness (Hr) and the gene for a normal coat (hr) Thus the Heterozygous Hairless is referred to as (Hrhr).

Puppies carrying only the hairless gene are Homozygous which means they carry a double dose of the hairless gene (HrHr). As it is a lethal gene they can have abnormalities so severe most will be aborted in the womb and reabsorbed by the mother; of those that are not, few are born alive but none will survive to adulthood. One popular theory is that breeding Hairless to Hairless without ever introducing the Powder Puff gene into a line can result in toothless, bald headed dogs with poor bone structure. Certainly it is true that in a Hairless to Hairless mating each puppy conceived will have a ¼ or 25% chance of being homozygous. As such Hairless to Hairless mating generally produces significantly fewer puppies.

The Powder Puff doesn't carry the hairless (Hr) gene at all, only the “normal” un-mutated gene for coat (hr), thus the Powder Puff is referred to as (hrhr). This combination is not lethal

The easiest way to represent all the above simply is in the form of a Punnet Square. 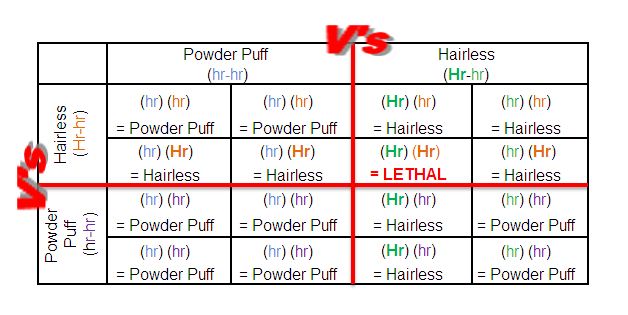 The mating of two Hairless (HrHr) x (HrHr) would result in the following average combinations:

However it is essential to remember that these percentages are applicable for every puppy conceived; each will have a ¼ chance of possessing the lethal gene not just one out of every four puppies.

As a consequence it is equally likely that this mating could produce all Hairlesses (Hrhr) or all Powder Puffs (hrhr) or any combination including that all puppies carry the lethal gene (HrHr).

It is likely that much of the heartache experienced by early breeders such as Mrs Ruth Harris who tried to remove or breed away from the Powder Puff variety suffered this fate. It also directly contributed to the near extinction of the breed.

There were two types originally bred in the Han Dynasty - the highly prized Temple House Guardians known as the Deer type (finer in body and head and longer in leg), and the hunting and kitchen dogs known as the Cobby type (usually lower in leg, of heavier build and bone and rounder in rib cage) though both types appeared active, graceful and elegant.

In modern times this defined separation has been all but lost due to the culling and petting out of the Powder Puff variety, especially of the males. This strangulation of the breed in continued Hairless to Hairless mating’s firstly reduced litter sizes but also lost the vigour and robustness that the Powder Puff offers the breed.

Desperate early attempts to bring the breed back from the brink demanded the crossing of types with the resulting modern Chinese Crested showing a definite leaning towards the Deer type. In fact few true Cobby or Deer types are seen these days, more a combination of the two types is being exhibited

Unfortunately many judges today still regard the Powder Puff as the poor relation. Both the Hairless and the Powder Puff should be regarded as equally acceptable and judged on their merits, not whether they are Hairless or Powder Puff. Breeders and exhibitors are tired of having their entry fees accepted for the Powder Puff only to have judges totally disregard the variety either through ignorance or personal preference

Powder Puffs are now regarded as an integral, although not essential, part of most breeding programmes. Both varieties co-exist. They are inseparable. You cannot breed only for Hairless dogs as explained above; the Powder Puffs will turn up as well even if both parents are Hairless.